QR codes are a great idea and they appear to be growing in popularity in the UK. You can scan a QR code using your mobile and this will take you to a webpage chosen by the creator of the code.

Wikipedia defines a QR code as:

A QR code (abbreviated from Quick Response code) is a specific matrix barcode (or two-dimensional code) that is readable by dedicated QR readers, smartphones, and to a less common extent, computers with webcams. The code consists of black modules arranged in a square pattern on a white background. The information encoded may be text, URL, or other data.

I have been QR code spotting and yesterday I noticed that Betfair are placing QR codes on two beach volleyball players at the Olympic Test event. The QR code below takes the user to a registration page to join Betfair, offering consumers a free bet. 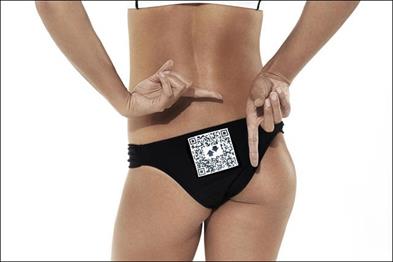 Related to this I found this great doodle 🙂

Cartoon: Not What We Meant by ‘Mobile’

Posted on August 10, 2011, in Uncategorized and tagged doodle, mobile, qrcode. Bookmark the permalink. Leave a comment.

This site uses Akismet to reduce spam. Learn how your comment data is processed.